Involved in the initial development of the brand and concept around the boutique childcare centres, Chris Giufre has consulted on the identification and contracting of the various centre sites.

Owning a multiple childcare centres himself, Chris Giufre understands the complex nature of the Childcare operations and has brought this expertise to Petit Early Learning. 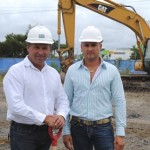 A much needed economic boost into the northern end of the Gold Coast was launched by Gold Coast City Councillor Grant Pforr when he joined Property Group co-director Chris Giufre at the 7400sqm site on Oxley road that the company purchased for $9 Million in October 2009.

Chris Giufre says the project will put Biggera Waters back on the map after the recent success of Westfield’s Helensvale Shopping Centre and the HIGHLY anticipated Coomera Town Centre.

Interviewed recently by Tom Reid from Gold Coast Business News Chris says “We’ve been looking for a while to set up a market, but you need the right population, demographics and traffic flow. With 30,000 cars a day travelling on Oxley Drive, this site had all the attributes for that,”.

“We wanted to create a food hub and a precinct for people to be able to come to dine and shop at the Northern end of the Gold Coast and to bring a level of produce that we felt was lacking on the Gold Coast.

“There is a lot of European influence in the development but we also aren’t forgetting the local producers of the area and we will be bringing a lot of Australian produce into the market.”

Giufre is also positive on how things are looking for the the northern end of the coast.

“There have been a lot of developments put on hold, but we believe now that banks are starting to come back to play so there will be lots of new developments popping up,” he says.

“In general the northern end has still got a lot of opportunity for growth; it will be the precinct to expand.”